This is loooong overdue, but it’s better late than never.  If you follow me on Instagram (or search #RowesItalyVacay), you might have seen our Italian adventures last fall.  The hubs and I took a two week trip to Italy for our five year anniversary gift to ourselves, although we did push it out until November on the eve of our sixth-year wedding anniversary. It was a four-city visit to include Rome, Florence with a day trip to Pisa, and Venice.  My goal is to share a post for each city, so let’s start with Rome!  I want to share where we stayed, highlights of each city and lessons learned.  When in Rome… be sure to do what the tourists do (haha.  just kidding).

We flew into Rome and stayed at the iQ Hotel Roma which was my favorite hotel of the entire trip!   I would highly recommend it anyone.  Very clean and modern Ikea-esque hotel. It had laundry facilities which are ideal for those who want to travel very light (as opposed to what we did – hee hee). We also enjoyed the rooftop terrace where we would sip a glass of wine purchased from the vending machine. Yes, there was a vending machine full of wine and beer and it was reasonably priced too!  It was a great place to unwind at night.

The hotel was in a fabulous location just off Via Nazionale – close to the train station and a manageable walk to the Roman Forum and Colosseum which was at the top of our ‘touristy things to-do’ list.

Downtown Rome is a European New York City… and I love NYC, so I soaked up the sights and sounds.  Listening to everyone speak in Italian was pretty cool, I only wish I could understand them.

Our top priority was to beat the jet lag.  It was an eight hour time difference, so we had a little bit of adjusting to do.  The following morning we walked to the Colosseum. It was here we were introduced to the “selfie stick.” Yes, that beautiful piece of arm extension hardware that enables you to take a selfie with 25 of your closest friends. We resisted at first, but I finally gave in later into the trip — I think it’s pretty awesome to be perfectly honest.  {giggle}. 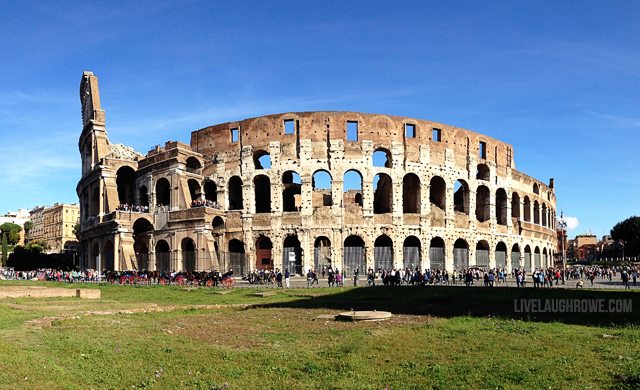 Anyhow, back to the better part of Rome. The Colosseum was AWESOME – at least to those not there to fight the lions.  I was mesmerized by the size and history of this attraction. After reading some of the history and remembering movies that I’ve seen set in biblical times, I tried to imagine 50,000 screaming people filling the space and wanting to see someone or something die. 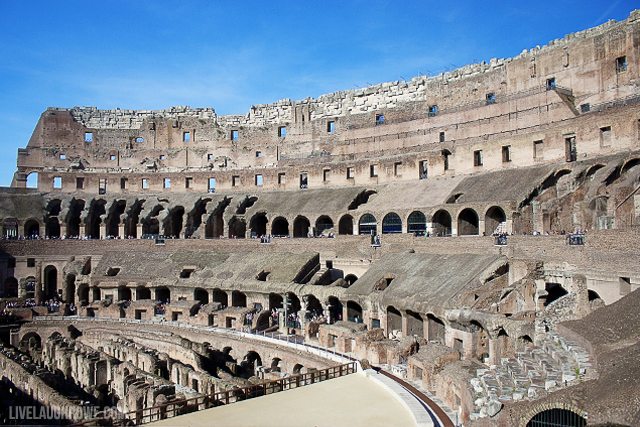 While only 1/3 of the original Colosseum remains, it’s an amazing piece of history.  A true highlight for me!  I would say that would be something to add to your bucket list.

From the Colosseum we went to the Forum and Palatine Hill. It was an incredibly long day that ended with a nice meal at Angelino’s across from Largo Corrado Ricci.

The next day we headed to Trevi Fountain, and just like our Rick Steve’s book said, it was pumped dry and covered in scaffolding. What a complete bummer that was!  I wanted to so badly toss a penny into the fountain.  We took a few forgettable pictures just because we had to and walked around the area for a bit. 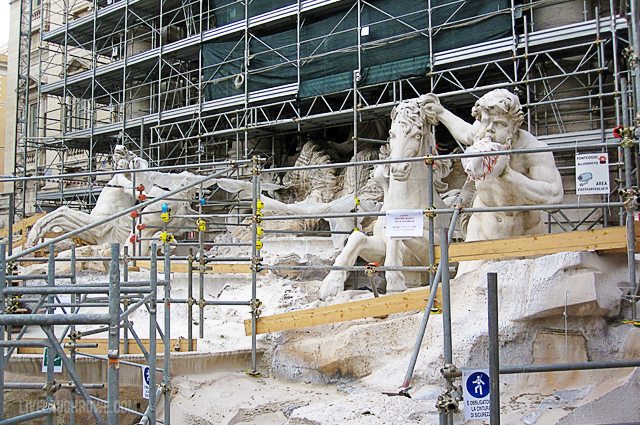 We did happen to stumble upon a fantastic Pinocchio store called Vecchia Falegnameria Pinocchietto, where I picked up a few souvenirs.  I’m a sucker for authentic souvenirs — nothing made in China and this store fit the bill!  A bonus was that a wood worker was there making a unique one-of-a-kind Pinocchio.  To pair with my wooden pinocchio, I went on a hunt to find a hard cover Pinocchio book written in Italian.  I think I’ll set out the pair at Christmas time each year. 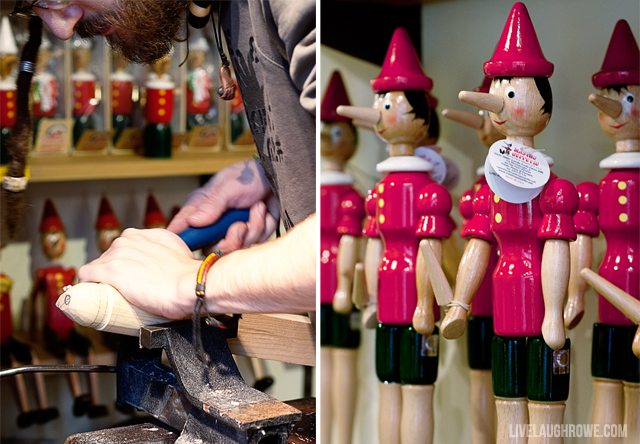 After the Trevi Fountain, we made our way to Vatican City.  We stood in line for almost an hour before getting into St. Peter’s, and after walking around the cathedral we didn’t have enough time to visit the Sistine Chapel, so we purchased advanced tickets for the following day just to avoid the lines — to arrive the next day to find no lines.  HA!  Live and learn.  I couldn’t help but laugh about that one. 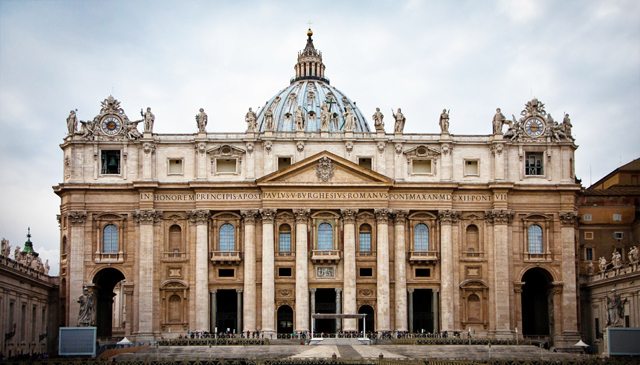 By the end of the day, my feet were in bad shape!  I knew we would be doing a lot of walking, but my feet were not having anything to do with this much walking. We had to make a stop at the Foot Locker to buy some sneakers. Sigh.

But first, a little background on what my husband does when he buys a travel guide (our Italy guide book was by Rick Steve’s). He doesn’t look at what there is to do, where to sleep, or where to eat.  He goes straight to the “what are the criminals up to” section. Turns out that Rick Steve’s mentioned a lot of pick pocketing, so my husbands guard was up for people getting too close.  While at the Foot Locker we were sitting on a bench trying on shoes. Out of his peripheral vision, the hubs noticed a kid sitting behind us on the bench. He didn’t appear to be looking at sneakers, but just hanging out which, rightfully so, raised my husbands suspicions. After a few moments, he glanced down behind me and noticed this kids hand next to MY purse. Seeing that we were on to him, he quickly moved his hand back and then got up and left the store.   GULP!  That could’ve been a very bad experience.  Thankfully, Steve was on the look out {wink}.

After visiting Vatican City, we took the metro to see the Spanish Steps and stroll down Via die Condotti. We grabbed a nice dinner at Hosteria on Via Nazareno (La Scalinata) and headed back home.  We enjoyed our meal so much at Hosteria that we returned when we arrived back in Rome at the end of our vacation to catch our flight home. 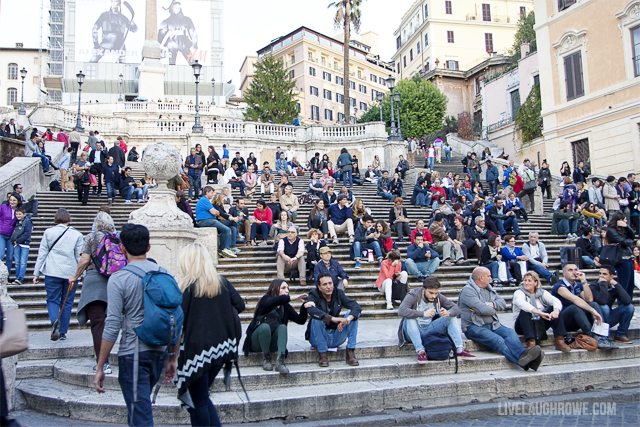 Sometimes asking the locals for recommendations is the best way to go.  On another evening we ended up grabbing a bite to eat at a restaurant recommended by a clerk at a grocery store, Il Corallo (turns out Sharon Stone ate there one time).  The dish I ordered was DELECTABLE!  We then made the 3km walk back to the hotel — and found my feet were in worse shape than I thought.  Oh, let’s just say blisters. Boo.

The Piazza Navona is a lively spot with local artists, musicians and more!  It’s an oblong square retains the shape of the original ractrack that was built around A.D. 80.   The square is also lined with restaurants and shops.  A lovely spot to do some people watching too! 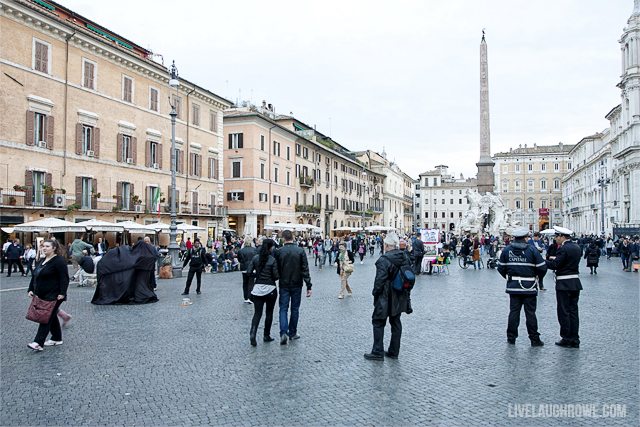 That’s Rome in a nut shell.  I think it’s a lovely place to visit once in your life.  Other places we experienced in Rome included:  Flann O’Brien Irish Pub, Queen’s Chips (if you like french fries – a.k.a. chips – as much as my husband does, these are the best he’s tasted outside Newfoundland) and Gelato from Gelateria Artigainale every night!  #nomnomnom.  All three places are located on Via Nazionale.

Next up is Florence, a quaint and lovely city where I could easily live. 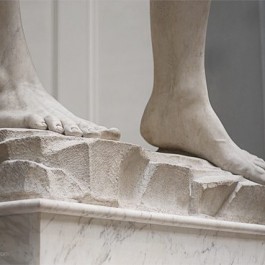 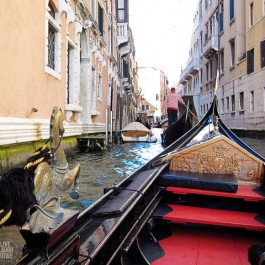 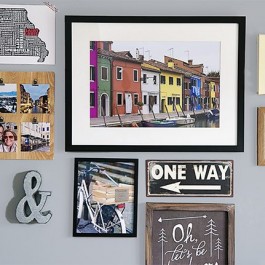 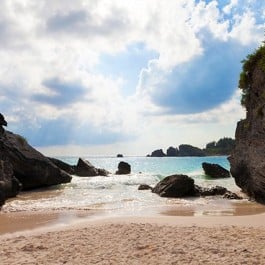 Best Ways to Save Money on Travel 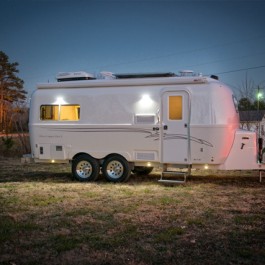 Why we chose the Oliver Trailer